f
g
Buses
B61
✕
Request More Info
Would you like to know more?

TerraCRG is pleased to present for sale a 3-story, mixed-use building of approximately 3,163 SF located at 203 Columbia Street, between Degraw Street and Sackett Street, in Brooklyn’s Columbia Street Waterfront District.

Covering roughly 22 city blocks, Columbia Street Waterfront District is one of Brooklyn’s smallest neighborhoods. The enclave, which borders the river, was created by the expansion of the Brooklyn-Queens Expressway (“BQE”) in the 1950s, which separates it from neighboring Cobble Hill and Carroll Gardens to the East. Columbia Street is the neighborhood’s main thoroughfare and home to many of this close-knit community’s noted restaurants, bars and local shops. The area is located in School District 15, which includes the highly regarded PS 29 elementary school. The quiet streets surrounding the property are lined primarily with townhouses, small multi-family and mixed-use buildings and occasional new developments.

Neighborhood attractions include the Jalopy Theatre and School of Music, the Jalopy Tavern, The Longshoreman modern Italian restaurant, the Brooklyn Collective, a shared space for artists and designers to display and sell their work, Alma, one of Brooklyn’s top Mexican restaurants, Popina restaurant which combines Italian and Southern cuisine, the Freebird Books & Goods independent bookstore and The Hop Shop, a popular local craft beer bar.

The nearest subway station is Carroll Street (the F and G trains). Other transportation options include the South Brooklyn ferry which makes stops in Red Hook, at the Brooklyn Bridge, in DUMBO and at Wall Street. The B61 bus route connects the neighborhood to Downtown Brooklyn, Red Hook, Gowanus and Park Slope. The BQE is accessible from Columbia Street and Atlantic Avenue. 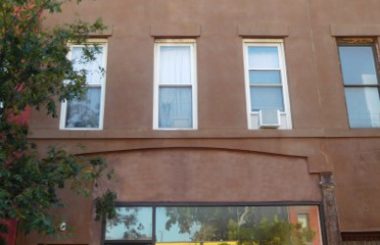